It’s been a while since we’ve posted, mostly because we’ve just been trying to enjoy our house after doing so much work on it.

However, we did do some work on the house this year – mainly, we replaced our windows. If you had a good eye, you might have noticed that, in previous posts like our kitchen renovation, or our downstairs bathroom renovation, that we had replaced windows in those rooms. However, all of the other windows were original to the house, barely opened, and looked pretty nasty. The ones in our living room were especially bad, because a previous owner must have let a giant dog jump up against them, so they were very scratched. On top of that, new windows are so much more energy efficient, so we figured it would cut the cost of heating and cooling. Also, the new windows meant we finally have screens for them, so we can hopefully cut the cost of heating and cooling even more by letting the weather do it for us, since we can now open the windows without worrying about a bunch of bugs!

All of those factors, combined with the fact that Lowe’s had a pretty good sale for MyLowe’s members a while back, with 10% off everything, plus a 10% off coupon that stacked, we decided we’d replace all the front windows, since we were able to get them for a pretty good price.

Unfortunately, since our windows aren’t normal sizes I guess, we had to wait about a month for them to come in. When they finally did come in, it took a while for Lowe’s to find them, and eventually we loaded both of our cars with a bunch of windows. Sadly, I didn’t get to take a picture of how packed our cars were, because since it did take so long at Lowe’s, a storm decided to roll in. When we got home, we had to unload the cars because the trunks were bungied down, so we did it as quick as we possibly could (we still got totally soaked). At least that size storm didn’t happen in the middle of installing the windows!

These windows are actually different from the ones we did previously – our kitchen and bathroom windows came from Home Depot. Because of that, it took me a little longer to figure out exactly how they go in, since they work a little differently. I thought we were going to have the four downstairs windows installed the first night. Instead, I barely had one installed the first night, and it took quite a bit of time. Over the next week or so, I got the rest of the downstairs windows installed. Unfortunately, we had to watch the forecast every night to see if I could work on them, because even after they’re installed, the caulk needs to dry, and the rain doesn’t help that. 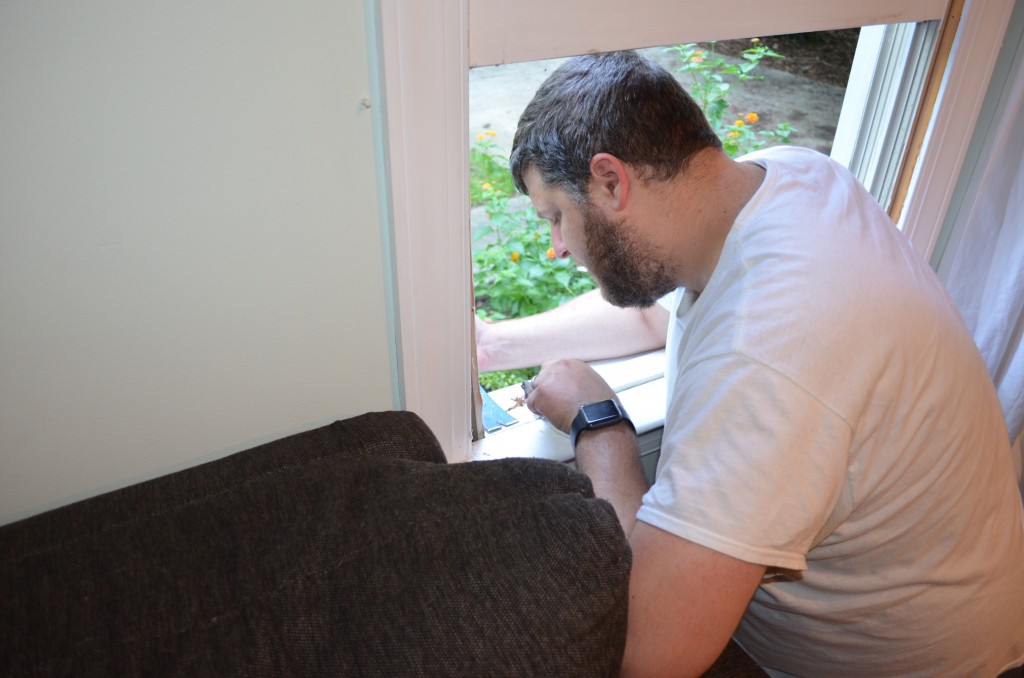 We did our best prepping the area in advance of all these, or using the time when it was rainy to get the inside ready, so the swap with the new windows would be pretty seamless. Removing all the window stops was something we did to make this easier. In the past, we actually removed all the trim and window stops to replace the windows, but I wanted to try and save as much as possible this time around. It definitely took a lot more time to try and make the thin pieces of window stop come out without snapping, but it ended up saving us some money in the long run.

After we removed all the trim, a lot of the paint was peeling or nasty, so Ashley sanded them down and repainted them all before I reinstalled them. 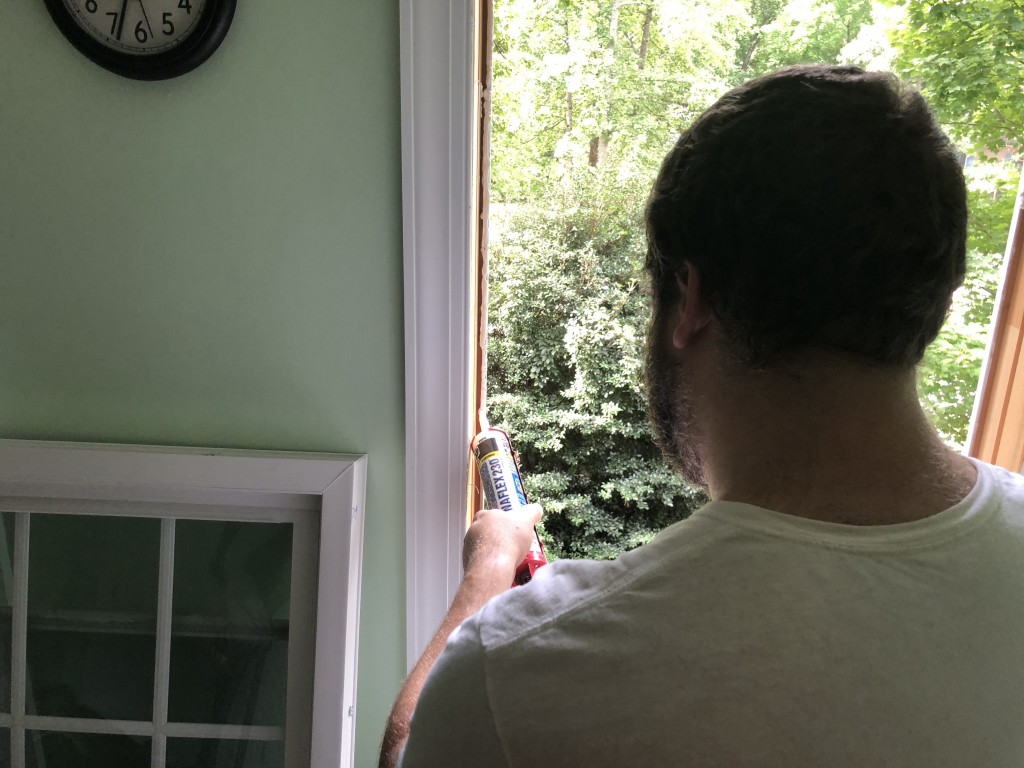 Caulking before putting the window in place.

Once I finished with the downstairs, we had already had the upstairs prepped, and since I had gotten somewhat used to installing the windows now that the four downstairs were done, I was managing to do two each night after work. The upstairs ended up going pretty smooth and fast overall, and I think we got it done even quicker than the downstairs – even with the extra window upstairs. 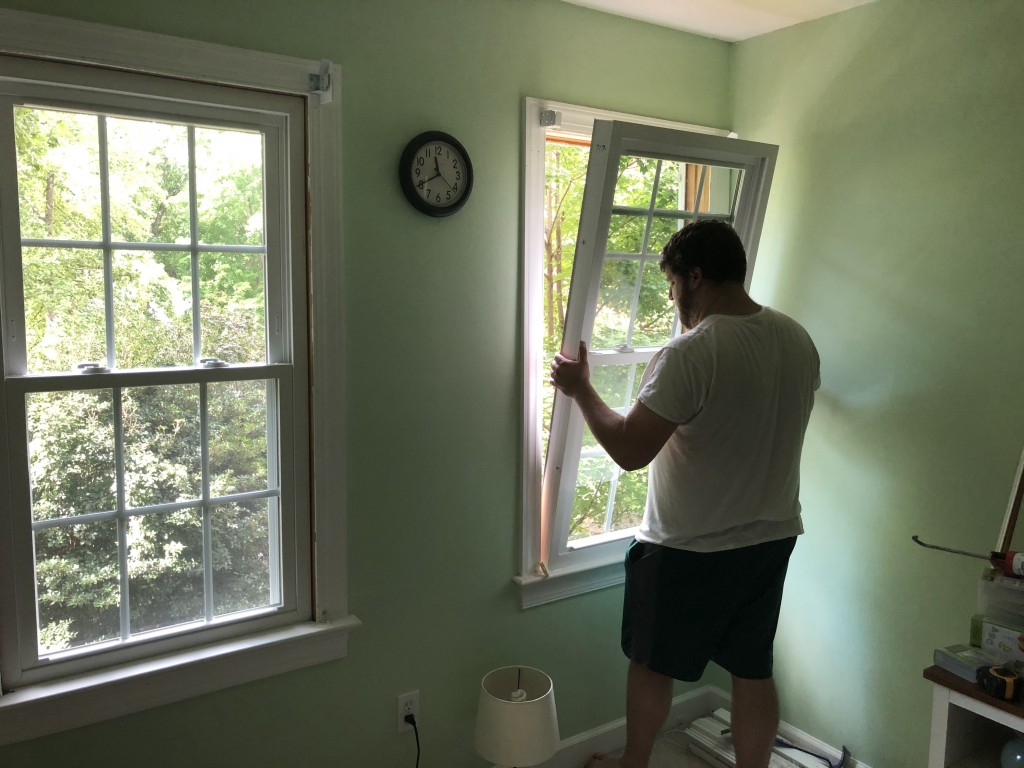 Installing one of the windows.

Now that we have all new windows in the front, it’s actually noticeably quieter inside, which isn’t something we even really thought about. When we’re towards the front of the house upstairs, if it’s raining you can barely hear it. But walking towards the back, where we haven’t replaced the master bathroom window yet, it sounds like a storm.

Overall, we’re pretty happy with how it turned out. It seemed to be a lot of work, because it was pretty humid out when I was doing them, but they look a lot nicer from the front of the house, they actually open now, and they seem like they’re more energy efficient. It was a project that I had been wanting to do for a while, but there were always higher priority things to come first. Since we’re still looking for land, we’re hoping when it does come time to sell this house, that improvements like this will help add more value for whoever is looking to buy. 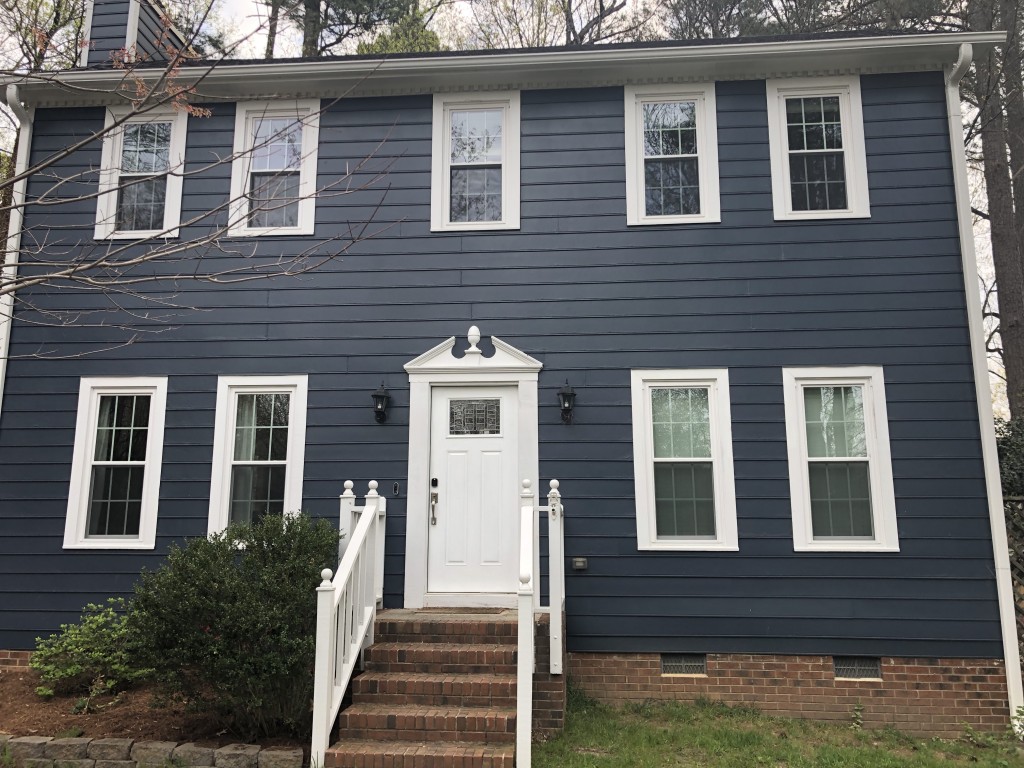